Get email updates for the DB2 Express-C Team Blog

Thanks to Google FeedBurner, you can now get a copy of new posts to this blog emailed to you. If there's ever more than one post a day, FeedBurner will send a simple daily digest instead.


Naturally, you can unsubscribe at any time.

There are good tools out there to cut down on the amount of noise on Twitter. One of them is the daily newspaper on paper.li, which presents a summary of the interesting tweets on a specific topic.

Some that you might find interesting:
There's a convenient option to subscribe to these via email, so paper.li notifies you whenever a new one comes out.

Getting Started with DB2 Application Development is a new book in the On Campus book series. It's available for free download as a pdf.

The book sets out to help readers:
Published books in the series include:
Cheers,

Webinar on using cloud for development and test October 14

There's a joint RightScale and IBM webinar about using cloud computing for development and test on Thursday, October 14:


Higher Quality Development, Faster Release Cycles
Thursday, October 14, 2010
7am Pacific / 10am Eastern / 3pm London
11am Pacific / 2pm Eastern / 7pm London
Join our live webinar to find out how a managed cloud solution can enable software development organizations to overcome common challenges. We’ll demonstrate the RightScale Development and Test Solution Pack featuring Zend and IBM software stacks and show you how you can reduce the time you spend configuring hardware and managing resources. Plus we’ll show you how your developers and testers can spend less time fixing errors and reworking code and more time experimenting, developing and testing.

I will be presenting on Oct 13th. My session is #3 and is titled "Database design for multi-tenancy and resiliency" ( 2:30PM-3:30PM EST = Toronto time). I will be talking about Amazon's and DB2's offerings/features for Software as a Service (SaaS) vendors who use multi-tenancy to reduce costs. I will also discuss about DB2's HADR feature as part of the resiliency section, and provide a demo to set it up using Rightscale.

Juice DB reports that the DB2 Express-C Amazon Machine Images (AMIs) for Elastic Compute Cloud (EC2) have been updated to 9.7.2. In addition to running the latest release of DB2 Express-C, they now include a simple web interface for the initial configuration in place of the older console-based approach. 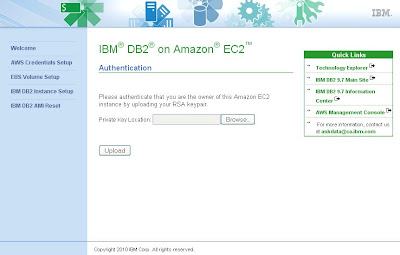 Run these AMIs through Amazon DevPay:
DB2 Express-C is a free product. There are no license fees, but you do have to pay Amazon for its hosting.

Once subscribed, you can launch them with the AMI ids below.

DB2 Express FTL now has more features and costs half as much. This is part of an array of changes IBM announced today across the DB2 database server line.

High Availability Disaster Recovery (HADR) provides a means for to shift database processing to a standby system in case of a primary system failure. Find out more in the HADR whitepaper (pdf).

Backup compression is an effective way to reduce storage costs in cloud computing and similar environments. When you renting storage on Amazon S3, a significant reduction in storage required for backups saves you money.

SQL replication lets you automate the movement of data from your production database for reporting, analysis, and warehousing.

DB2 Express FTL gets you double the database performance by taking advantage of twice as many cores and twice as much RAM as DB2 Express-C.

24x7 IBM Support gives you peace of mind should anything ever go wrong.

DB2 Express Fixed Term License (FTL) is the natural step up from the free DB2 Express-C. The price for it is set at $1990, about half the price of comparable competitor offerings.

We have updated the free "Getting started with DB2 Express-C" ebook with information covering up to DB2 version 9.7.2. This is the 3rd printing/update of this popular ebook. The update is minor, so we have not changed the edition of the book which remains at "3rd Edition". Some of the changes/additions made are:
Download the updated ebook now!

We have also updated all the other ebooks fixing minor typos and formatting issues:
and we have just published a new ebook: Getting started with DB2 application development.

All published eBooks and the ones coming soon are listed at ibm.com/db2/books

Make your data always available - 30 minutes to set up

Having worked in technical support for a number of years, there is one thing that always stressed me out the most: The sound of a pager in the wee hours of the morning. That beeping sound is the most annoying one I've experienced in my IT career so far; it normally signaled an emergency that needed to be fixed asap, no matter how many hours it would take.

Like me, I don't think DBAs like to be paged in the middle of the night when there is a system failure. With DB2 database servers, you can minimize disruptions to your life and ensure to keep your boss and your company happy by investing 30 minutes of your time; it's that simple! Thirty minutes is all it takes to set up HADR (High availability disaster recovery) feature available with DB2. The technology used in HADR has been around for more than a decade. We based it on Informix (another IBM database server) and it is very robust.

The basic requirements for HADR are:


Now let me explain how it works with a few figures. HADR works at the database level. Figure 1 shows a client at the top, and two servers using HADR and in sync at the bottom. 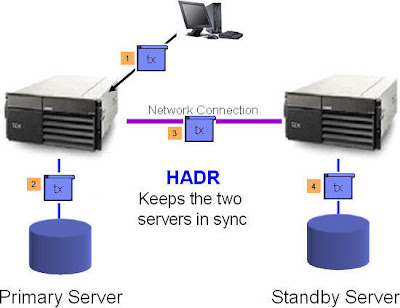 In (1) the client performs transactions which are sent to the DB2 primary server. In (2) the DB2 primary server processes the transactions and stores the modified data on disk. The operations performed, for example an UPDATE statement, are also logged in files (log files), which are also stored on disk. In (3), the log files are sent to the Standby server which processes them in (4). This way the Standby is kept in sync with the Primary.

Figure 2 illustrates what happens when for any reason the Primary server crashes as shown in (1).

In (2) Tivoli System Automation (TSA) which is included with the HADR feature detects that the primary server crashed, and thus, executes a "takeover" command. The takeover command switches the roles between primary and standby servers. Note in the figure, the server on the right is now identified as the primary. In (3) when client attempts to reach the server on the left fail, the "Client reroute" feature included with DB2 kicks in, which automatically reroutes the client's work to the server on the right. Work then continues as usual and in (4) transactions are processed and stored on disk. This whole process takes only 15 seconds! 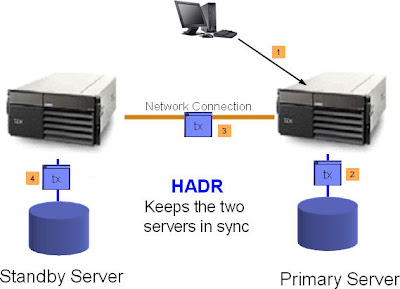 Figure 3 - How HADR works - Part 3
You can also use the standby server for read-only operations for example for reporting. This is an added benefit because it ensures the primary server is used mainly for transactions (OLTP) workloads, while the standby takes care of reporting (DSS/OLAP) workloads. If a takeover operation is required, readers are blocked from the standby.

Another added benefit of HADR is that it allows you to perform rolling upgrades without disrupting your operations. This means you can suspend HADR to apply maintenance to one server first (say the standby) while operations are continuing on the primary. You can then start HADR again so the two servers are put in sync, and then switch the roles with a manual takeover command. Suspend HADR again, and then apply maintenance on the other server.

This feature provides a lot of value to any company and can be easily set up in minutes from the DB2 Control Center or IBM Data Studio. It allows for high availability as described above, when both servers are sitting on the same location. If you want this feature to support Disaster Recovery, all you need is place the standby server in another location (another building, state, country or continent). This is why the feature is called HADR.

There are many other options and scenarios with HADR. For example, you can set up HADR in the Cloud. I will also be talking about HADR next week at the developerWorks CC4D (Cloud Computing for developers) event. My session is titled "Database design for multi-tenancy and resiliency". HADR fits the "resiliency" part.

For more details about HADR and other high availability and disaster recovery scenarios, watch the replay of this Chat with the labs event.