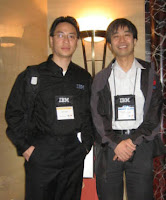 About four weeks ago, starting May 11, 2007 I visited Korea, Japan, and Singapore (One week each). In total I reached approximately 760 students and teachers in 8 university visits. In Korea I attended as well the Korean Database Conference in Mokpo, south of the country. Cheol Kang (IBM Korea) is doing a superb job delivering many DB2 lectures. He is also the co-author of a DB2 book written in Korean, and he gave me several copies to give away during my speeches. Professor Park from Yonsei University is also very kind to organize several of my visits. In Japan, I had the honor to be hosted by Hiroshi Maruyama, the IBM Tokyo Research Lab director, and IBM distinguished engineer. The picture is with Mr. Maruyama (or as they say in Japan "Maruyama-san") at the ACM event held in March 2006. Maruyama-san accompanied me to two of the three universities visited in Japan, and in fact he was the one responsible of organizing these visits. Maruyama-san also delivered a speech about the Global Technology Outlook (GTO) for 2007, and kindly offered to replicate my speech whenever possible in the future. In Singapore, I delivered a speech to customers at the IBM Singapore location. I discussed as well with a professor from NUS School of Computing, attending the speech, the possibility of starting a DB2 certification program in their school. At Nangyang politechnic, I delivered a speech to close to 240 students. Some teachers at this institution visit every year the IBM Toronto Lab for joint-research projects and to learn about new technologies. After almost 3 months in Asia, I finished my first DB2 on Campus tour of 2007 in that continent on June 2nd!!!. 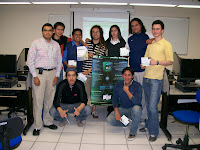 Last year I visited several universities in Mexico, and I'm very glad about the progress of the DB2 on Campus program in that country. Miguel Angel Garcia Trujillo, the DB2 on Campus program manager in Mexico maybe one of the reasons why the program is becoming a successful one since my last visit. The picture in this blog item is of him with students of two DB2 User Groups.

In total there are three very active DB2 user groups in Mexico:

These DB2 user groups have been promoting DB2 in their universities and other universities, they have helped with the translation of several DB2 documents to Spanish, and many of the students are preparing to write the DB2 Certification Exam 730 (DB2 Fundamentals). Their enthusiasm is contagious!.

I will be visiting Mexico again this year (June - July), and I will have the chance to see the members of these DB2 User Groups. They plan to write the exams prior to my visits.